Sarah Palin Believes She Can Win The 2012 Presidential Election

U.S. News and World Report  covers an ABC News interview of Sarah Palin which aired on Wednesday.  During the interview, Sarah Palin states that she is considering a presidential run in the 2012 election. Barbara Walters, the host of the interview, asked Sarah Palin if she could beat Barack Obama and win the election.  Sarah Palin replies matter-of-factly: “I believe so.”

The results of an Associated Press GfK poll, however, tell a different tale.  The poll results indicate that Sarah Palin is viewed favorably by only 46% while 49% view her unfavorably.  Interestingly, of those that considered themselves Republican or independents who lean toward the GOP, 79% had a favorable view of her.

Getting Down With TPP

On Wednesday, November 10, 2010, a few days prior to the 18th APEC Economic Leaders’ Meeting of November 13 and 14, 2010, 3000 farmers and fishermen protested Japan’s plans to initiate discussions to join the Trans-Pacific Partnership (or “TPP”). The farmers and fisherman were not getting down with TPP.  APEC, or Asian-Pacific Economic Cooperation and trade forum where the Japanese government, in sharp contrast, will hopefully join the TPP, and is comprised of 21 Member Economies which are: Australia; Brunei Darussalam; Canada; Chile; People’s Republic of China; Hong Kong, China; Indonesia; Japan; Republic of Korea; Malaysia; Mexico; New Zealand; Papua New Guinea; Peru; The Republic of the Philippines; The Russian Federation; Singapore; Chinese Taipei; Thailand; United States of America; and Viet Nam.  The 18th APEC Economic Leaders’ Meeting where leaders of the 21 nations meet in Yokohama located in the eastern Kanagawa Prefecture, Japan, comes the day after the G20 Summit in Seoul, Republic of Korea ended.  With the goal of supporting sustainable economic growth and prosperity in the Asia-Pacific region, APEC is the premier Asia-Pacific economic trade forum established in 1989 ””to further enhance economic growth and prosperity for the region and to strengthen the Asia-Pacific community.”   Since inception, APEC’s total trade has grown 395% while GDP in purchasing power parity for the APEC region has tripled.

President Barack Obama was in attendance at the 18th APEC Economic Leaders’ Meeting today and has already held a bilateral meeting with the Prime Minister of Japan, Naoto Kan, with regard to the TPP and opening up the Asia-Pacific Rim to American exports thereby creating more jobs in America.  President Obama also welcomed Japan’s interests in the TPP.  As reported by CNN’s Kyung Lah in Yokohama, the TPP is “the NAFTA of East Asia.”  The CNN correspondent further stated that although one of the topics at the meeting is trade, all eyes are upon the results of the meeting as China’s growing rise in economic power is “casting a shadow over all of APEC.”  “Even if Japan decided to sign on to the TPP tomorrow, you also can not have any sort of free trade zone that would be significant without considering economic superpower in this region which is China….”   The outcome of the 18th APEC Economic Leaders’ Meeting should prove to be one that is at least ”interesting,” if no solutions are reached similar to the outcome of the G20 Summit in Seoul. 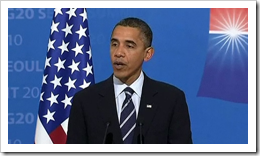 “We have asked our teams to work tirelessly in the coming days and weeks to get this completed and we are confident that we will do so, and President Lee in fact asked his team to come to Washington in the near future to continue these discussions,” stated President Obama.